Digital R&D in the Arts Forum

This week, the Victorian Gothic grandeur of Manchester’s Town Hall saw a very 21st century gathering, as Nesta hosted a Digital R&D in the Arts Forum. Two members of the CReATeS team – Doris Eikhof and Claire Squires – attended, along with Gillian Easson from Nesta’s Scotland Office, and Stephen Green from Distrify, which is working with Glasgow Film in the one of the first-call projects funded in Scotland. 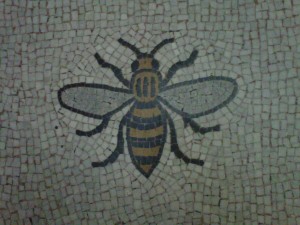 The English version of the fund (with Arts Council England rather than Creative Scotland as partner funder along with Nesta and the AHRC) has already seen a completed series of pilot projects, and a handsome set of case studies was included in the delegates’ pack, and – with additional content – from the Fund’s website. Some of the projects funded in this round spoke about their work: New Art Exchange’s Skinder Hundal showcased Culture Cloud, which focused on the development of online platforms in order to ‘shapeshift’ the relationships and practices of artists, galleries, audiences, in order to diversify the marketplace for art. This, he argued, created a ‘total system’ of both new transactions (of varying types of value) and interactions.

One question flagged up during the introductory session to the day by the Chief Executive of the AHRC, Rick Rylance, and which remained a gentle refrain throughout the day, was what the place of academics is in the research and development process. This is well established in the sciences, but less immediately evident – and arguably less often undertaken – in the arts & humanities.

The will is clearly there for partnerships between academia, arts & culture organisations, and creative technologists, and they are being facilitated by the Digital R&D fund. ‘We love research,’ said Kam Star, a games developer at Playgen who has worked with over 40 universities, ‘and we love sharing.’

Beyond such warm feelings (welcome in what was possibly the coldest meeting venue CReATeS has yet met), what the destinations that such pathways to co-production of knowledge, development of modes of thinking, and critical analyses of processes and product, might arrive at is as largely uncharted. That said, speakers including Hasan Bakhshi (Nesta’s Director of Policy and Research, Creative Economy), referred to academics’ capacity for interdisciplinary thinking, design, testing propositions, and rigour, and the necessity to publish their findings in peer-reviewed journals.

Explorations continue: the English fund has just announced a new series of projects which will investigate, among other themes, the possibilities for real-time audience monitoring, metadata crowdsourcing tools, and platforms for storytelling on mobile devices. And by the end of this month, we’ll find out who the second-call projects in Scotland are…

This entry was posted in Uncategorized and tagged Arts Council England, NESTA, over the border, research. Bookmark the permalink.