Louisa Preston is currently researching a PhD at the Universities of Stirling and St Andrews based on the Nesta Digital R&D Fund.

In October this year the sixth Tiree Tech Wave took place on Tiree. Organised by Professor Alan Dix and Graham Dean, the Tech Wave was an opportunity for me to visit the island, see what happens at a Tech Wave and test out the latest version of the app An Iodhlann developed in collaboration with Alan Dix called Frasan. 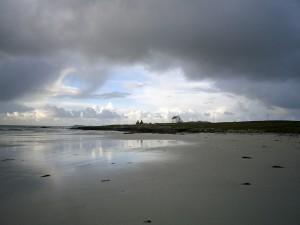 I wasn’t really sure about what I would expect to find at this festival/gathering of tech minds. What I did find was an intriguing, strange but curious experience over three days on the island.

My colleague and I arrive to a really windy day, although I was told that was just a breezy day for them. The Rural Centre is a brilliant multi-use building, housing a café/restaurant, the main Internet connection for public use, and an auction mart for livestock. This is where the Tiree Tech Wave was based for its duration. On arrival we met everyone sitting round a large oval table, each person had a laptop on in front of them, there was a Lego technical set on the table, a rusted metal cog that Alan had brought up from the beach (I’m not sure what his plan was for that) and a digital scrolling display – attached to two laptops. 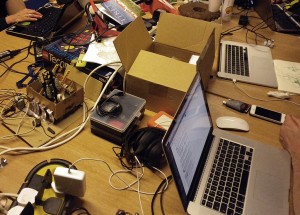 Ideas and possibilities are the main menu of the day at Tiree Tech Wave, and it’s an opportunity for people to gather together, to test out these ideas, discuss and debate them and test them out. I spoke with people about really imaginative mind bending ideas. These included; things you could make with Arduino boards and kits, the very nicely designed Italian made, DIY circuit board elements, which were a completely new and exciting thing to me; 3D printing and associated websites like Thingiverse; and a thing called a nanomuscle, which is a material with shape memory, that constricts like a muscle when electric current is passed through it.

Thinking on this, what is really fascinating for me is that these incredible sounding ideas can eventually become a reality, perhaps more mind boggling are the possible applications of them. As well as this though there is an aim for what happens at the Tech Wave and resulting tech ideas to be linked in to the wider community of Tiree, and for the visitors to meet with residents of the island. For instance, at 9am on Sat morning we were invited to the local regularly scheduled circuits class, where I spent 30 minutes running on the wildly windy beach for a warm up, followed by 30 minutes of circuits in the community hall. It struck me how the outdoor surroundings, and the weather elements must have such an impact on what people do and how they live on Tiree. On a grey misty day it can feel quite bleak- there are no trees or mountains – but there are plenty of beaches, which must be amazing in the summer months.

Driving around Tiree in a very small hire car, to test out the app, really bore this out for me. I had initial difficulties with the app, but when I had got it working, it was fascinating to see the historical images and items that are held in the An Iodhlann archive, in relation to where I was at that moment. I think that is the strength of the app, to create a digital entrance to the archive and its contents, while roaming around the island, connecting the past with the present.